The Earth colonists brought domestic animals with them to Oliquin. Familiar farm animals and pets to help ensure a safe and sane transition to their new world. There are also indigenous life forms on their new planet that were similar, in one way or another, to a plant or animal variety on Earth and therefore were given the name of their Earthly likeness. Many other indigenous life forms, plant and animal alike, are unique to Oliquin. The most noteworthy characteristic of some Oliquin life forms is their unusual ability to form a connection with the human mind. Some human/Oliquin bonds can be strong and consistent, whereas others are fleeting and erratic. Humans may not always be receptive to, or aware of, the mental connection. And this unusual bond or connection is considered by some humans to be a fable, a figment of a wild imagination, particularly in the early years of colonization. Many centuries later biologists will define the natural capacity of Oliquin’s indigenous life forms to mentally connect with humans by what is called the ‘telepathic scale’.

At the top of the telepathic scale is the pegafox, a reclusive woodland animal that many consider to be nothing more than a child’s fairy tale. Others, however, believe that the pegafox can bestow upon certain humans its telepathic gift. 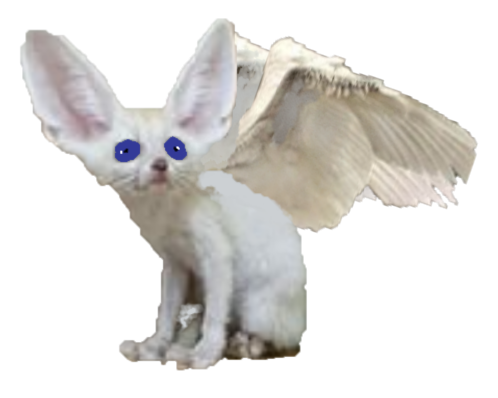 A small, woodland animal found in the forested areas of the Northern Hemisphere.. Climbers are prolific and are even considered to be pests in some regions. Pictured to the right is Monk, the one-armed pet climber featured in the Oath of the Cortek Series. Climbers fall in the medium-to-low range of the telepathic scale.  Artwork by Ron Sundquist. 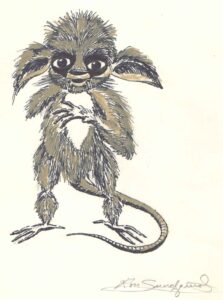 An ostrich-size animal that jumps at its victims, attacking with its feet which have extra long, and very sharp talons. They feed on small mammals and have been known to kill larger animals and humans when threatened. Their skin is scaly on top, and furry on their legs and undersides and they have no teeth in their fish-like mouth. Males of the species have spiky fins along their spine and a soft, rooster-like crown on their heads. The forktoe ranks low on the telepathic scale.  Featured in Book 1, Oath of the Cortek Series. Artwork by Ron Sundquist. 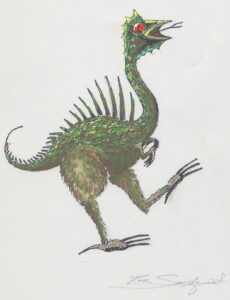 This giant bear-like mammal usually walks on its hind legs. It is known to be of very low intellect with a non-existent rank on the telephathic scale. A brute of a beast, it uses any forceful means to render its prey immobile, including knocking prey senseless with its giant paws, kicking, stepping on, or even smothering by laying or sitting on top of it. Far from agile, a grear typically has a favorite spot where it attacks–a place where even more nimble prey find it difficult to escape. Featured in Book 1, Oath of the Cortek Series.

A fresh-water, aquatic amphibian, waterhorses rank high on the telepathic scale. They exist only in very large fresh-water lakes in temperate climates of the northern hemisphere and cannot survive if taken away from their natural habitat.  They are speedy swimmers, and their quiet, trusting disposition and telepathic ability establish them as a most suitable mode of transport for humans wishing to across the large bodies of water in which they thrive.  Featured in Book 2, Oath of the Cortek Series. Artwork by Ron Sundquist. 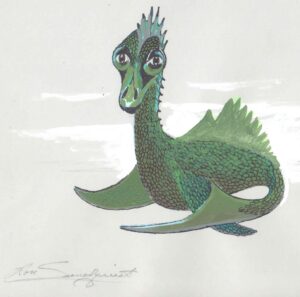